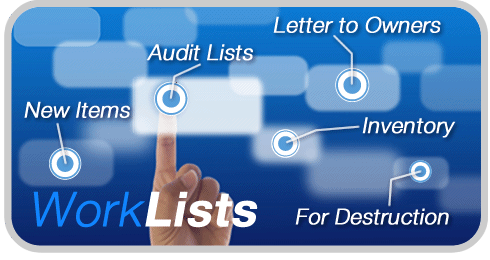 Worklists - Pickup Where You Left Off

The items you need at your fingertips. A Worklist is a collection of items you are working with that have a common purpose—property to be auctioned, inventory items, letters to be sent, items to be destroyed, and much more. 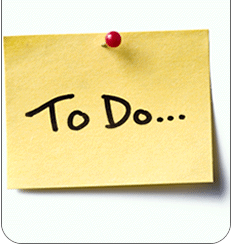 Think of a worklist as a "to do" list. For example, OnQ users can automatically create worklists for items they've just entered to simplify the printing of barcode labels or reports. They can also create worklists from query results for common actions they want to perform (printing labels or reports, requesting, and so on) on this otherwise disparate group of records.

Users' own worklists are always available to them whether they are logged in via a web browser (WebView) or through a desktop application. Users can create and save their lists, log out and log back in at any time on any device, and then pick up where they left off.

The primary function of a New Items worklist is to create a grouping of new records that you have entered into the system.  For example, after a police officer enters new evidence, he or she could retrieve the worklist to perform tasks for all of the entries such as generating property sheets, crime lab forms, or notifications to owners. This frees the officer from having to search for the items individually or case by case. After any tasks are completed, the list can be deleted and a new worklist started. The New Items worklist can be assembled manually or automatically generated.

A General worklist can be created and maintained in tandem with the New Items worklist. This type of worklist contains records addedfor a common task. For example, a property room supervisor could be collecting items that need to be pulled for purging. As each item is found, it is added to the worklist. Thie collection process could go on for one day, for several days, or even longer. When it is time to perform the task, the supervisor retrieves the worklist. An itemized list can then be generated and sorted by storage location, to make retrieval more efficient. While the worklist is still displayed, specific items can be selected to generate letters to the owners. Individual items can be removed from the worklist, additional items can be added, or the list can be deleted and a new one started.